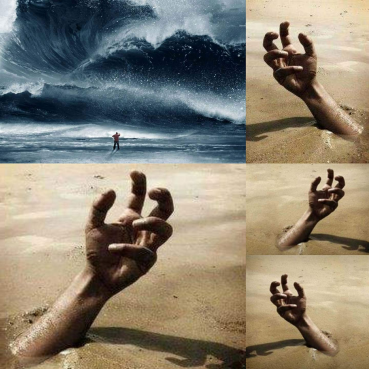 A STRANGE DREAM I’ve kept SECRET for a year that I wish never came true. What you are about to read I actually wrote, exactly as shown, one year ago, just 6 days after my Dad died. Today marks the one year anniversary and this is the first time I’ve re-read this since, and am ready to share it with you. Remember, this was written a year ago. I’ve added some new comments in parentheses.

CANCER TSUNAMI
Significant events in my life are often preceded and followed by meaningful dreams. This previous week with the passing of my Dad on Monday, February 27th (2017) it began with a clairvoyant dream the night before he passed. In most instances, a clairvoyant dream does not identify the location or the time and day the event would occur. Clairvoyant dreams aren’t usually recognized as precognition until after the fact, as was the case with my tsunami dream.

Upon waking that morning I just had a strange feeling in my gut that something was not right. I had a seemingly random thought, “If my Dad passed away sometime during that day would we pull the kids out of school or wait until school was done? How would we break the news to them?” This thought quickly passed but I was left with an uneasy feeling and a need to just go lay quietly with the kids before they woke up. First I snuggled up to Brayden, very mindful of how calm, peaceful and precious that moment was. I stayed next to him for several minutes until he woke up around 7:30am. Then I went into Lauren’s room and did the same thing.

Around 10:15am, as I just finished up with my last client for the morning, we got the phone call that my Dad had been taken to the emergency dept. at the hospital and we needed to get there asap. We were told he only had hours to a few days. He passed away around 6:30pm later that day.

(We did pick up the kids early from school and they both got to experience some very special and memorable last moments with their Grandpa.)

My Dream: The night before my Dad passed I dreamt of a tsunami. However, I was arriving at a beach after the tsunami had already happened. Although you would not want to be present during a tsunami, I felt like I arrived too late, and there was nothing I could do to help. There were dead bodies half buried in the sand everywhere, mostly with their arms reaching out from the sand. There were also cell phones lying strewn all over the place. I recall questioning myself in the dream about what had just happened, trying to make sense of it all. I woke up feeling very upset, yet not fully aware of what I had just been dreaming about.

According to Carl Jung, a tsunami dream is very significant. It is one of those great “archetypal” dreams, meaning symbols which are universal across all cultures. A tsunami is supposed to be a symbol of some great spiritual change, the washing away of the old and the beginnings of new growth.

A tsunami can indicate a tremendous and fundamental change in you. Most people now know that tsunamis are caused by massive earth changes under the sea. These changes are part of the natural order, and often show themselves to people in their dreams. So they can be understood as an expression of our personal adaptation to enormous changes that are going on around us and within us. They can wash away most of the beliefs, social structures we have built or held onto as important. Be ready to meet change in your life and in your family. Yet, if we are not afraid of change and the forces that we are actually involved in, then we can find enormous power and force within us.

(When my brother passed away 7 years ago I found this power within me which led me to competing in my first bodybuilding competition together with Alissa. Since my Dad died I have let fear, anger and depression rob me of this power and force. This has affected many areas of my life, including my commitment to exercise and nutrition where I’ve been very inconsistent. However, there has been a recent shift and I find myself in a much better place.)

After the fact, I was struck by the parallels between my dream and my recent final visits to the chemo treatment centre with my Dad (the most depressing place I’ve ever been, partly because my Dad was always the person in the worst looking condition there). Everyone was covered by white sheets hooked up to an IV, similar to the bodies in my dream covered with white sand and their arms reaching out as though they were hooked up to an IV. When sitting with my Dad during his treatments I found myself staring at a sign that read “Cell Phone Use Prohibited”. In my dream cell phones were scattered across the sand everywhere.

Within my dream the tsunami represented a “natural disaster” of another kind…cancer. The fact that I arrived after the tsunami meant I was too late and there was nothing else I could do. The image of bodies in the sand everywhere with outreached arms positioned exactly as they were if hooked up to an IV to me represented the experimental drug treatment my Dad received. In my opinion, and based on the research I did, it was this aggressive treatment of the cancer, with minimal attention giving to treating my Dad’s deteriorating health from the side-effects, that really took a much greater toll on his health than the cancer itself. This interfered with proper nutrition, causing major weight-loss, lack of energy and loss of strength to the point where he was left with no independence or any quality of life.

(During every trip for treatment my Dad had to complete a questionnaire where he rated how he was feeling and functioning on a scale of 1 (best) to 10 (worst). On every question he scored a 9 or a 10, the most severe. Every week I could see for myself how much worse he was getting and how he was losing his ability to drive, to walk, to talk and eventually to even stand or go to the washroom without assistance. Some of the nurses administering the new treatment questioned his condition and yet the doctor let him continue. As much as I emphasized the importance of better nutrition it wasn’t until three days before he died that we got to meet with a hospital dietitian to discuss a better plan for his diet that included a meal plan with specifics. NUTRITION SHOULD HAVE BEEN A PRIORITY FROM DAY ONE!)

Be the first to start the conversation!